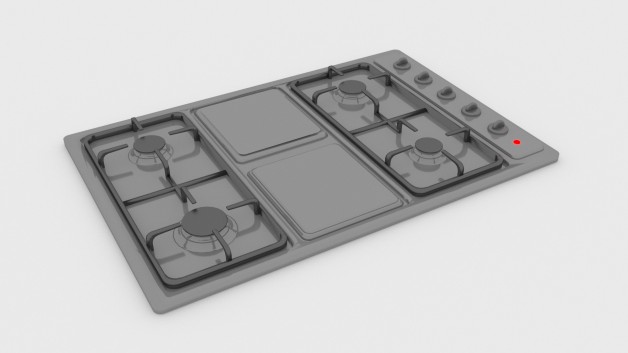 A gas stove is a stove that is fuelled by combustible gas such as syngas, natural gas, propane, butane, liquefied petroleum gas or other flammable gas. Before the advent of gas, cooking stoves relied on solid fuels such as coal or wood. The first gas stoves were developed in the 1820s and a gas stove factory was established in England in 1836. This new cooking technology had the advantage of being easily adjustable and could be turned off when not in use. The gas stove, however, did not become a commercial success until the 1880s, by which time supplies of piped gas were available in cities and large towns in Britain. The stoves became widespread on the European Continent and in the United States in the early 20th century. Gas stoves became more common when the oven was integrated into the base and the size was reduced to better fit in with the rest of the kitchen furniture. By the 1910s, producers started to enamel their gas stoves for easier cleaning. Ignition of the gas was originally by match and this was followed by the more convenient pilot light. This had the disadvantage of continually consuming gas. The oven still needed to be lit by match and accidentally turning on the gas without igniting it could lead to an explosion. To prevent these types of accidents, oven manufacturers developed and installed a safety valve called a flame failure device for gas hobs (cooktops) and ovens. Most modern gas stoves have electronic ignition, automatic timers for the oven and extractor hoods to remove fumes. Gas stoves are a significant source of indoor air pollution and require good ventilation.