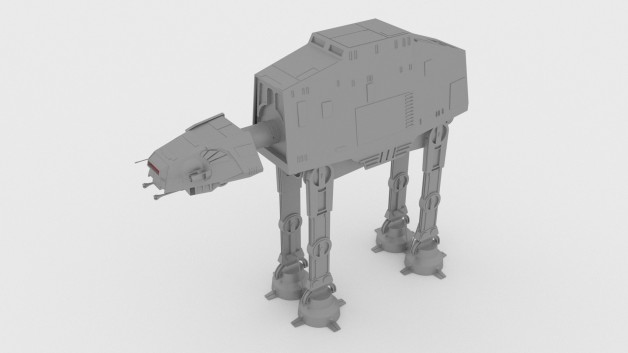 The All Terrain Armored Transport, or AT-AT walker, is a quadruped mechanized infantry combat vehicle used by Imperial ground forces. The AT-AT (pronounced either casually as 'at at', or using only the letters 'A.T. A.T.') was first introduced in The Empire Strikes Back (as the Galactic Empire's main units against Rebel Alliance infantry during the Battle of Hoth) and also appears in Return of the Jedi (as the vehicle used to transport Luke Skywalker and Darth Vader to their shuttle on the forest moon of Endor) and in Rogue One (in the AT-ACT variant, used to respond to the attacks of Rebel infantrymen of the Rogue One unit during the Battle of Scarif, although later defeated by the arriving Rebel Red Squadron of starfighers). The AT-AT also appears in a destroyed form in Star Wars: The Force Awakens, explained in the video game Star Wars Battlefront (2015) to be a residue of the Battle of Jakku, which was the Empire's last defeat and resulted in its dissolution. Modified forms appear in The Last Jedi (used by the First Order to attack Resistance forces in a former Rebel base). The theme park attraction Star Wars: Rise of the Resistance, set after The Last Jedi, features two full-sized AT-ATs in a hangar bay. These walkers, while mostly static, can move their cannons to allow for a scene in which the walker's drivers spot the ride vehicles and fire at them.