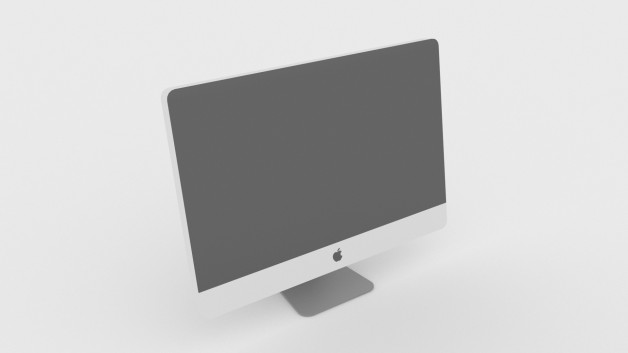 iMac is a family of all-in-one Macintosh desktop computers designed and built by Apple Inc. It has been the primary part of Apple's consumer desktop offerings since its debut in August 1998, and has evolved through seven distinct forms. In its original form, the iMac G3 had a gumdrop or egg-shaped look, with a CRT monitor, mainly enclosed by a colored, translucent plastic case, which was refreshed early on with a sleeker design notable for its slot-loaded optical drive. The second major revision, the iMac G4, moved the design to a hemispherical base containing all the main components and an LCD monitor on a freely moving arm attached to it. The third and fourth major revisions, the iMac G5 and the Intel iMac respectively, placed all the components immediately behind the display, creating a slim unified design that tilts only up and down on a simple metal base. The fifth major revision (mid-2007) shared the same form as the previous model, but was thinner and used anodized aluminum and a glass panel over the entire front. The sixth major revision (late 2012) uses a different display unit, omits the SuperDrive, and uses different production techniques from the older unibody versions. This allows it to be thinner at the edge than older models, with an edge thickness of 5.9 mm (but the same maximum depth). It also includes a dual microphone setup and includes solid-state drive (SSD) or hard disk storage, or an Apple Fusion Drive, a hybrid of solid-state and hard disk drives. This version of the iMac was announced in October 2012, with the 21.5-inch (55 cm) version released in November and the 27-inch (69 cm) version in December; these were refreshed in September 2013, with new Haswell processors, faster graphics, faster and larger SSD options and 802.11ac Wi-Fi cards. In October 2014, the seventh major revision of the 27-inch (69 cm) iMac was announced, whose main feature is a "Retina 5K" display at a resolution of 5120 × 2880 pixels. The new model also includes a new processor, graphics chip, and IO, along with several new storage options. The seventh major revision of the 21.5-inch (55 cm) iMac was announced in October 2015. Its main feature is a "Retina 4K" display at a resolution of 4096 × 2304 pixels. It has the same new processor, graphics chip, and I/O as the 27-inch iMac, along with several new storage options. On June 5, 2017, Apple announced a workstation-class version of the iMac, called the "iMac Pro". The iMac Pro shares the design and screen of the 5K iMac, but is colored in Space Gray rather than silver. It comes with Intel Xeon processors and standard SSD storage. Apple began shipping the iMac Pro in December 2017.