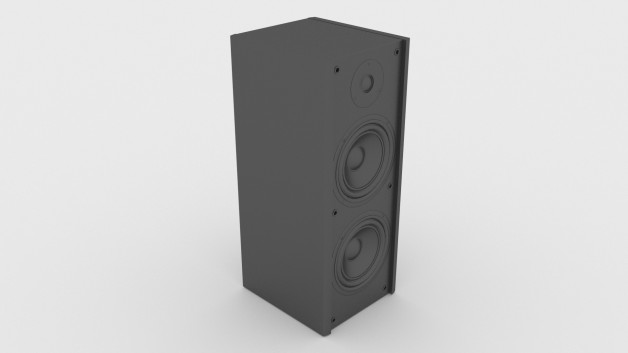 A loudspeaker is an electroacoustic transducer; a device which converts an electrical audio signal into a corresponding sound. The most widely used type of speaker is the dynamic speaker. The sound source (e.g., a sound recording or a microphone) must be amplified or strengthened with an audio power amplifier before the signal is sent to the speaker. The dynamic speaker was invented in 1925 by Edward W. Kellogg and Chester W. Rice issued as US Patent 1,707,570. Apr 2, 1929. The dynamic speaker operates on the same basic principle as a dynamic microphone, but in reverse, to produce sound from an electrical signal. When an alternating current electrical audio signal is applied to its voice coil, a coil of wire suspended in a circular gap between the poles of a permanent magnet, the coil is forced to move rapidly back and forth due to Faraday's law of induction, which causes a diaphragm (usually conically shaped) attached to the coil to move back and forth, pushing on the air to create sound waves. Besides this most common method, there are several alternative technologies that can be used to convert an electrical signal into sound. Speakers are typically housed in a speaker enclosure or speaker cabinet which is often a rectangular box made of wood or sometimes plastic. The enclosure's materials and design play an important role in the quality of the sound. The enclosure generally must be as stiff and non-resonant as practically possible. Where high fidelity reproduction of sound is required, multiple loudspeaker transducers are often mounted in the same enclosure, each reproducing a part of the audible frequency range (picture at right). In this case, the individual speakers may be referred to as drivers and the entire unit is called a loudspeaker. Drivers made for reproducing high audio frequencies are called tweeters, those for middle frequencies are called mid-range drivers and those for low frequencies are called woofers. Extremely low frequencies (16Hz-~100Hz) may be reproduced by separate subwoofers. Smaller loudspeakers are found in devices such as radios, televisions, portable audio players, computers, and electronic musical instruments. Larger loudspeaker systems are used for music, sound reinforcement in theatres and concert halls, and in public address systems.