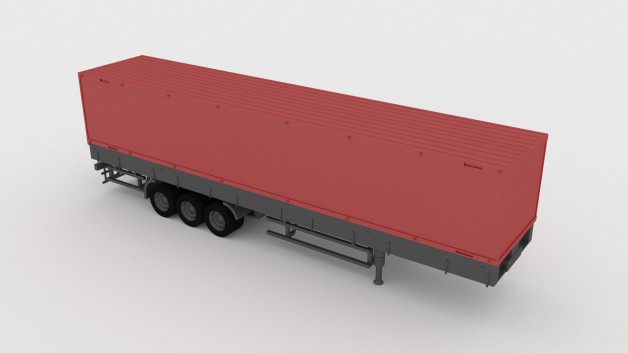 A semi-trailer is a trailer without a front axle. In the United States, the term is also used to refer to the combination of a truck and a semi-trailer; a tractor-trailer. A large proportion of a semi-trailer's weight is supported by a tractor unit, or a detachable front-axle assembly known as a dolly, or the tail of another trailer. The other portion of the semi-trailer's weight is semi-supported (half-supported) by its own wheels, which only support the rear of the semi-trailer. A semi-trailer is normally equipped with landing gear (legs which can be lowered) to support it when it is uncoupled. Many semi-trailers have wheels that are capable of being totally dismounted and are also relocatable (repositionable) to better distribute load to bearing wheel weight factors. Semi-trailers are more popular for transport than full trailers, which have both front and rear axles. Ease of backing is cited as one of the semi's chief advantages. A road tractor coupled to a semi-trailer is often called a semi-trailer truck or "semi" in North America & Australia, and an articulated lorry or "artic" in the UK. Semi-trailers with two trailer units are called B-doubles (Australian English) or tandem tractor-trailers, tandem rigs, or doubles (American English). Other terms used are "B-train" or (when there are three or more trailers) "road train". A double-trailer combination is possible with the use of a dolly, or "converter dolly" (Australian and American English), essentially one to three additional axles placed under the front of a second semi-trailer. The first semi-trailer is connected to the power unit using the tractor's fifth wheel coupling while the converter dolly, already attached to the second semi-trailer, is connected to the first semi-trailer with a drawbar. In Australian English, the tractor unit is called a "prime-mover", and the combination of a prime-mover and trailer is known as a "semi-trailer", "semi" or single.